One step off the door mat was all it took. The hard floor swung up to meet me like a prize fighter – and there I was, spread-eagle, handbag flying, on a suddenly unpredictable side trip, face bashed enough to split a cut across my nose. I was sure I’d broken my right knee-cap and some invisible, cackling demon was sawing at my left wrist with a rusty blade. I lay there whimpering for what may have been an hour or so but was probably about ten seconds before the store staff and customers broke out of their shock and rushed towards me to help. I remember none of their faces now.

See, I got myself a new day job. (Yes, even us glamorous writers/travellers have to cough up for banal items like groceries and electricity. So dull.) On my first day I found that my desk chair was broken and all I had to sit on was a waiting room chair. It didn’t have wheels and was very, very uncomfortable. Fortunately, I was told I could order a new one.

My side trip began the following day when I went down to a local office supply store to sit on a few chairs and pick one I liked. I mean, if your tushie is going to get that familiar with a seat, you wanna make sure they’re going to be cosy and comfy together, right?

So after lunch I headed out into the drizzling rain. I parked the car and walked inside. Alas, a little wet spot on the floor was all it took to turn my life upside down. 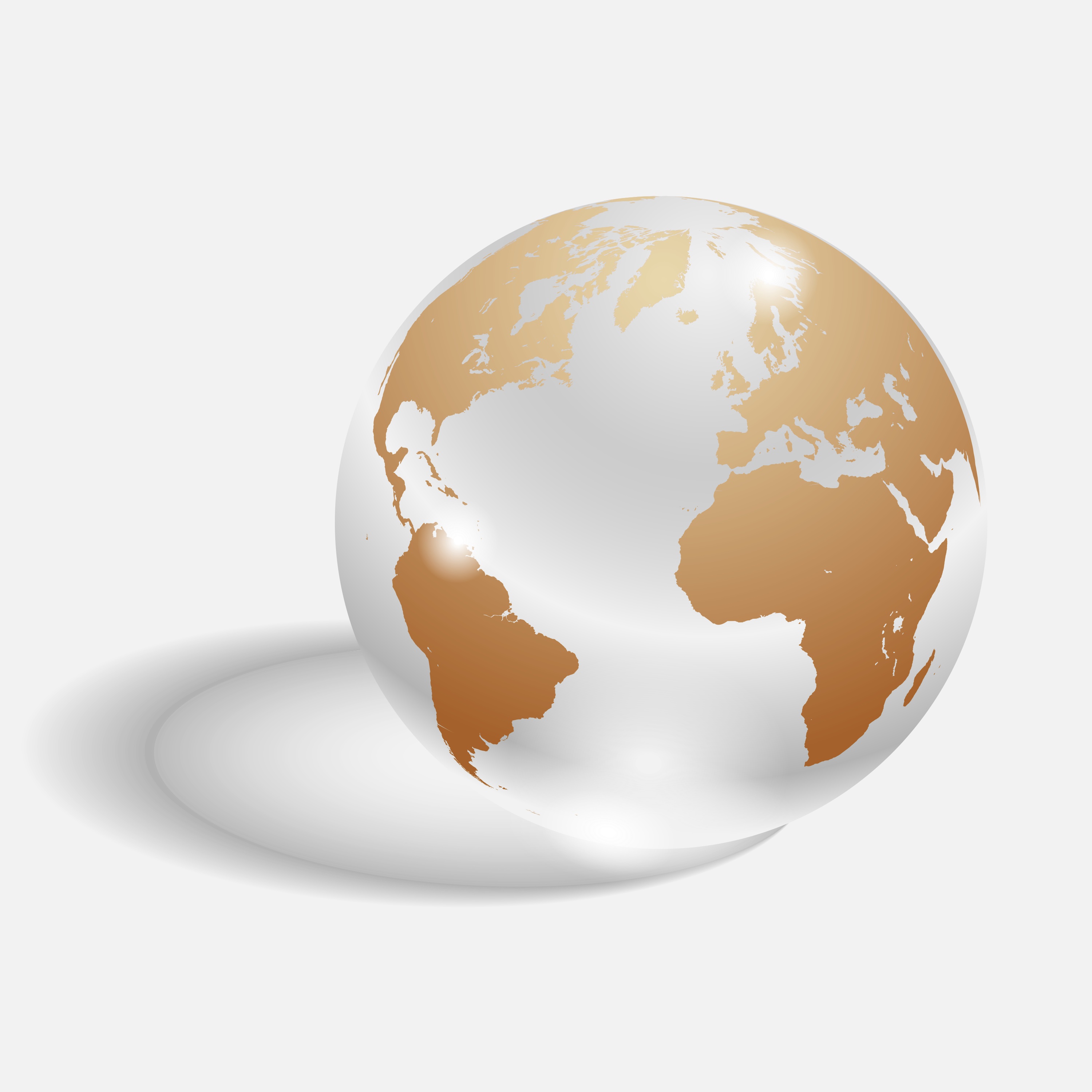 Sitting in Emergency for around four hours while pressure intensifies in your bladder is definitely character building. Around eight hours later I eventually emerged with a cast on my broken left wrist, cuts and bruises on my face, a full-length brace on my damaged right knee  and my right hand with substantial soft tissue damage so bad that I couldn’t use the crutch they gave me and kind of hobbled and hopped my way through the hospital to the car park where my friend drove me home. You’ve never seen a more pathetic sight.

(And thank you so much to my best friend for sitting and waiting with me the whole time!)

I think my favourite moment was when I begged them again for pain relief and – after 4 hours – they came back with some tablets. Tablets! When I’m lying flat on my back with a neck brace on, unable to sit up.

Some more begging and a little whimpering got me some liquid pain-killers from the children’s ward. Even that had to be slowly squirted into my mouth via a syringe so that I wouldn’t drown. Sigh.

Trying to move on

Unable to drive with a cast on for six weeks meant I couldn’t to work – but Australian law prevented my boss replacing me. I couldn’t even write: attempts to use the keyboard resulted in the kind of letter mash-up usually reserved for babies between the ages of 6 and 12 months. And it turns out all those voice-to-text programs are way more popular than they have a right to be.

Despite the best help from family and friends, I was effectively a prisoner in my home for six weeks except for when I went to the doctor’s.

I can see you thinking – fantastic! Time to catch up on movies, on reading, on sitting around and chilling. And I would have so been there with you – except for the little issue of pain. And by little, I mean huge.

I’ve been pretty fortunate in my life that I never required serious pain medication outside of hospital, so I never noticed the long-term effects it can have. How it can seduce you, curry you into a half-zombie, half-dreamy state where completing sentences really seems a tad over-rated. Where getting up off the couch/bed/chair is downright offensive. Where even feeding yourself becomes an actual, hand-on-my-heart chore.

I snoozed through a lot of movies (and some of them actually deserved it) – and snoozed through most of the next few weeks until the worst of the pain was under control. It took more than 2 months to get off the serious drugs and their dopey side-effects. I got therapy for both knee and wrist after the cast came off (that pain was the worst of all!).

Recovery was slow. My boss sent me stuff so I could work remotely – but I’m here to tell you that trying to learn a new job at a distance while effectively one-armed and loaded to the gills with narcotics is not something I’d recommend to any but the most fool-hardy adventurer. Actually, not even then.

I finally got back to work full time by the end of August. Certain that my problems were behind me, I ramped up my efforts to learn my new job, determined to make up for lost time. 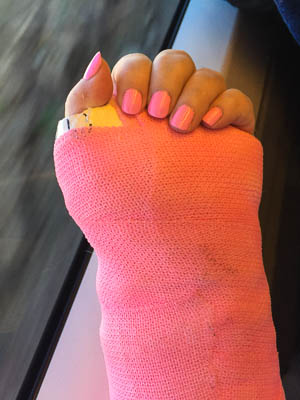 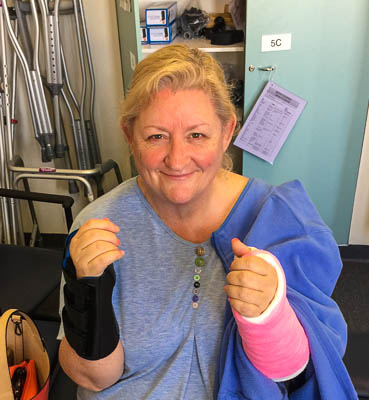 Alas, the fates weren’t done with me yet. Five weeks weeks later, I came down with pneumonia. Yep. Not a cold, not the flu – pneumonia! Two weeks off work. For the first few days I was so sick I could literally not get myself out of bed. I admit I was starting to feel a little picked-on.

It was at this point that I moved house. Twice. Yes, you read that right.

In my defence, I’d actually arranged it all months earlier. Most of my stuff went to the house I’d just purchased and planned to renovate (more about that another time) and the rest to a friend’s place close to where I was working (and where I’ll be living for the next few months). A drive of 4 hours separates the two.

Again, in my defence, I did hire people to do the actual moving, and I got a friend to help at the other end. And I did take plenty of rests in between an endless stream of decision-making (it’s almost more exhausting than moving boxes!).

Three weeks later, two days after I got my usual energy back – I got sick again. I swear I’m not making this stuff up! Another week off work and my poor boss is having a nervous breakdown.

I wish I could say things returned to what I laughingly call, “normal”. Alas…

A tooth which I’d had crowned many years ago began to get a little loose. The dentist told me that the entire molar was totally crapped out – infected down both roots, a nice big abscess nestled between them. It had to come out. Now.

So out it came, with a little pushing and shoving and little bits of broken tooth dropping onto my tongue in the process. And just to put the cherry on the top of this little cupcake – the same tooth on the other side of my mouth had the same problem and would also have to come out three weeks later!

Fortunately, once the anaesthetic wore off the pain was normal and easy to deal with.

Within two days, I was in the very bowels of hell, rolling around unable to take a single breath without gasping. Imagine your jaw, lacerated and stitched from a large tooth extraction. Now imagine somebody holding a glowing red railway spike against the raw bone and hammering it in, again and again and again, endlessly, hour upon hour, day after day.

I would have literally run to the doctor’s if such effort would have made me pass out. The dentist gave me antibiotics that had no effect. High grade pain killers that only shaved just 10% off the pain. Nothing stopped it. Nothing silenced the endless screaming inside my head.

I did what any sane person would do – I consulted Dr Google, who sent me scurrying back to the doctor a week later to get a different antibiotic. I took one, plus a double dose of a powerful painkiller. I got comfortably high for about four hours – but the pain didn’t budge an inch. The only good thing was, that for those four hours, I simply didn’t give a shit about it any more.

But then something magical happened. About six hours after I’d taken the first dose of the new antibiotic, I suddenly found myself almost pain-free. It was like that time I was in Bangkok, on the precipice of melting in the full-summer heat like a wax dummy in Raiders of the Lost Ark – when I stepped into an arcticly-cooled 7-Eleven. It was that same level of relief. So deep, so profound it was almost a religious experience, as my sister would say.

After 10 days of a brutal hell, (where I didn’t miss a single day of work – but wanted to), things finally started to improve until I was off the pain killers completely. I got the second tooth out – and fortunately the infection was already gone and the pain was minimal. Yay me!

The side trip that wasn’t

That pretty much gets you up to date. I know I missed out telling you about the massive depression I fell into, nor about the new diagnosis of anxiety that I now need treatment for, or the nail I broke opening the milk carton this morning – but I think this is plenty for a single blog post.

And why am I writing it now? Because somewhere over the last few weeks, while I lay immobile with the Black Dog, I made a decision and I came to a realisation.

See, I’d kept thinking that this is almost the worst year ever, and that I can’t wait until it’s over so I can get on with my life, get back to the things I’d planned to be doing over the last six months. Back to normal.

But the thing is, all of this – the breaking bones, losing teeth, carefully walking myself back from the brink of drug addiction – this is my life. The whole thing is a side trip. It’s crazy, unpredictable, off-the-wall and sometimes, more painful than even I could possibly imagine (and trust me, you don’t want to go there). But there’s no point waiting until it all calms down thinking that’s the normal bit – because it’s all normal. This is what life is.

So I decided that in between all the crazy, whenever I have a moment, and whatever that moment can deliver me, I’ll grab it. I’ll use it. Even if half my face is numb. If I can’t eat, drink or – god help me – talk. But I can write. Today. So I’m using it. Taking these moments of blissful time free of pain and discomfort and doing something with it. I don’t know how long it will last before the next crisis flies up in my face. But I do know that I won’t have wasted another chunk of my life waiting for things to get better.