Teargas, Swimming Pools and a Midnight Dash to Safety – Nazca

Nazca, September: We had no moon. Occasional lights from a truck parking among the others on the side of the road only made the darkness of the desert more profound. It was cold. The day’s heat was long gone, but closeted by the bus we’d been travelling in, it wasn’t until we were standing around wondering what was going to happen next that I began to shiver.

We were stuck in the middle of nowhere and the road was blockaded up ahead. Striking gold miners carrying guns and sticks, armed police and nervous locals stood between us and the town of Nazca, where we were supposed to be spending the next two nights. Except that we were standing out here, in the pitch dark, cold and with no signs of food, water or toilet facilities. And no way of knowing if the violence was headed our way.

Our guide, Ollie, was doing his best – but at times like these, even being Peruvian didn’t necessarily get any more answers. The miners were on strike to get better conditions – a noble goal given how incredibly dangerous their methods of extracting gold by hand were. There had been some small pockets of violence but no movement from the powers that be. So the miners had covered the road with rocks and stopped all trucks, buses and even local vehicles from entering the town of Nazca from any direction.

We had two choices. Sit here all night and hope there’d be a resolution – or turn around and head back to the first hotel we found, missing Nazca altogether.

We chose a third option.

There are times when travelling in a group can make you prefer to have your nails pulled out with a pair of pliers – but this wasn’t one of them. Truck drivers milling around told us not to go, but with that boldness you only ever seem to have when you travel, our group and that from another bus all decided to strap on our backpacks and walk the rest of the way. Through the blockade.

Yes, you read that right.

It’s moments like this that remind me how amazing total strangers can be. As we each strapped on our hiking boots, pulled out our backpacks and fixed head-torches, there was a constant, quiet chatter as people checked that everyone was okay, that they were going to stay warm, how to ensure we kept together, what we were to do if anybody was challenged. I’d never seen half these people in daylight, but suddenly, they all had my back.

We set out in good spirits, but still wary. As we passed heavily armed police they said nothing that we could understand (or perhaps chose not to), but our collective torchlight illuminated more than a couple of raised eyebrows and resigned shrugs.

The road was pretty tough. Steadily uphill, rocks and boulders were strewn everywhere, and even with my flashlight I managed to turn my ankle and staggered just shy of a total face-plant, propelled by the weight of my backpack. For a good few seconds, the pain was so bad I thought I might have broken something. But fortunately, it ebbed quickly enough to keep going.

From that point onwards, I hobbled rather than walked, going so slowly that a fellow traveller I’d never met offered to carry my pack for me so I could walk faster and stick with the group. I could have kissed him.

Small groups of miners sat around camp fires here and there, staring at us as we passed. Some called out, others sternly turned their backs, as though our presence was the final insult. They talked quietly among themselves, a few wandering between each camp fire. Some carried guns over their shoulders, others stood leaning on long poles. All appeared stubborn and utterly determined. But not one was even remotely threatening to us.

What had started out as a short-ish hike to town ended up being more than 5km, and by the time we got there, my ankle was on fire and it was long past midnight.

Our hotel had a high locked gate open and ready for us, then they shut it firmly again as soon as we were all inside. A shower and bed were heavenly after that welcome to Nazca. Alas, the worst was yet to come. 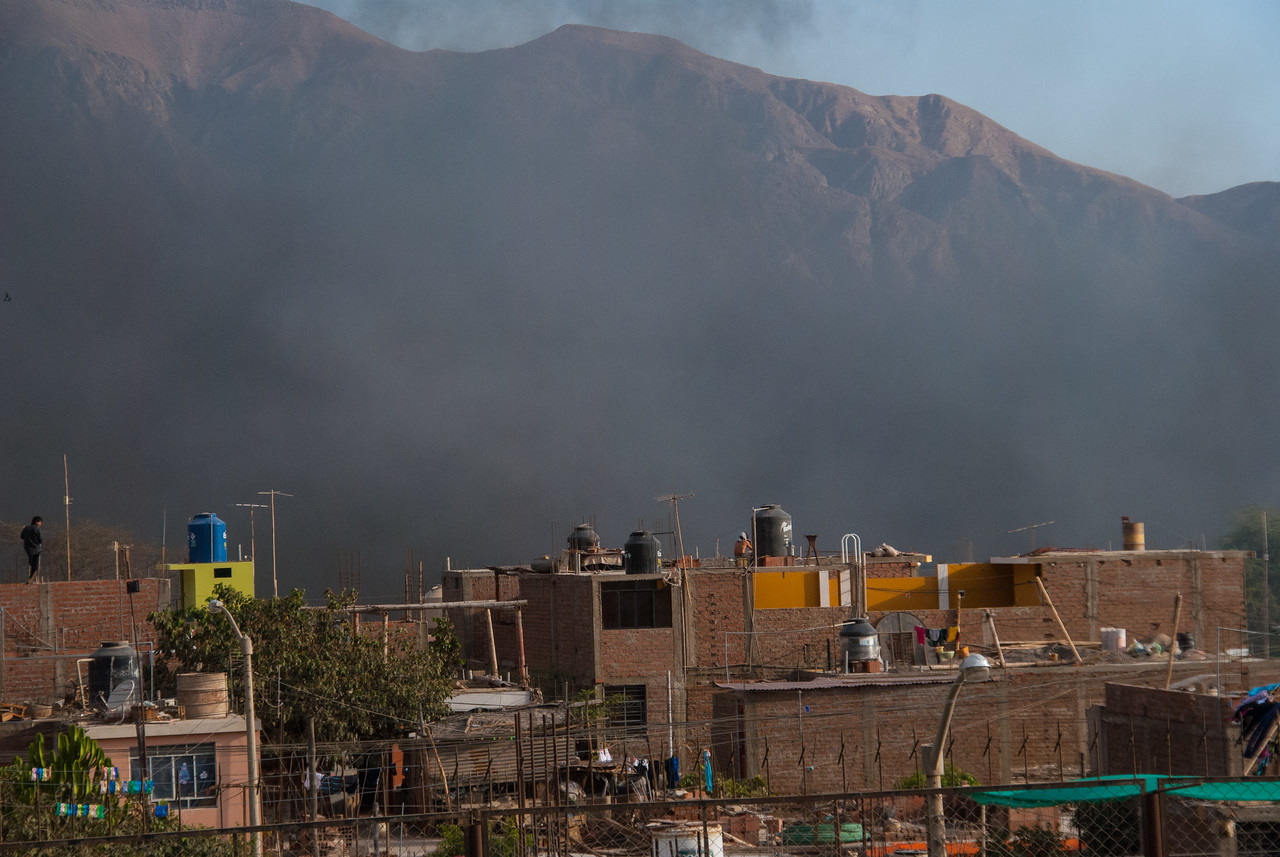 At breakfast in our little Nazca oasis I learned more about the troubles. The strike was one of a handful in the area that had been off and on over the last few weeks, and a response to a spike in miner deaths. The local government was slow to respond and the miners were getting more impatient. We were locked inside our hotel – but unable to leave the building as it was simply not safe on the streets, we were told.

After last night’s experience, I wasn’t so sure, but I didn’t want to risk anybody else, so I stayed inside the compound – even though I was dying to go out and talk to people.

But we were lucky in the hotel: we had plenty of food, a swimming pool and an abundance of delicious local beer. And a fifth storey roof we could stand on to see what was happening out in the streets. Which was plenty. In almost every direction I could see locals lining the streets, armed police with riot shields, striking miners marching and workers on other roofs, looking on, concerned and unsure. Every now and then noise would start up; the miners were banging on oil drums. 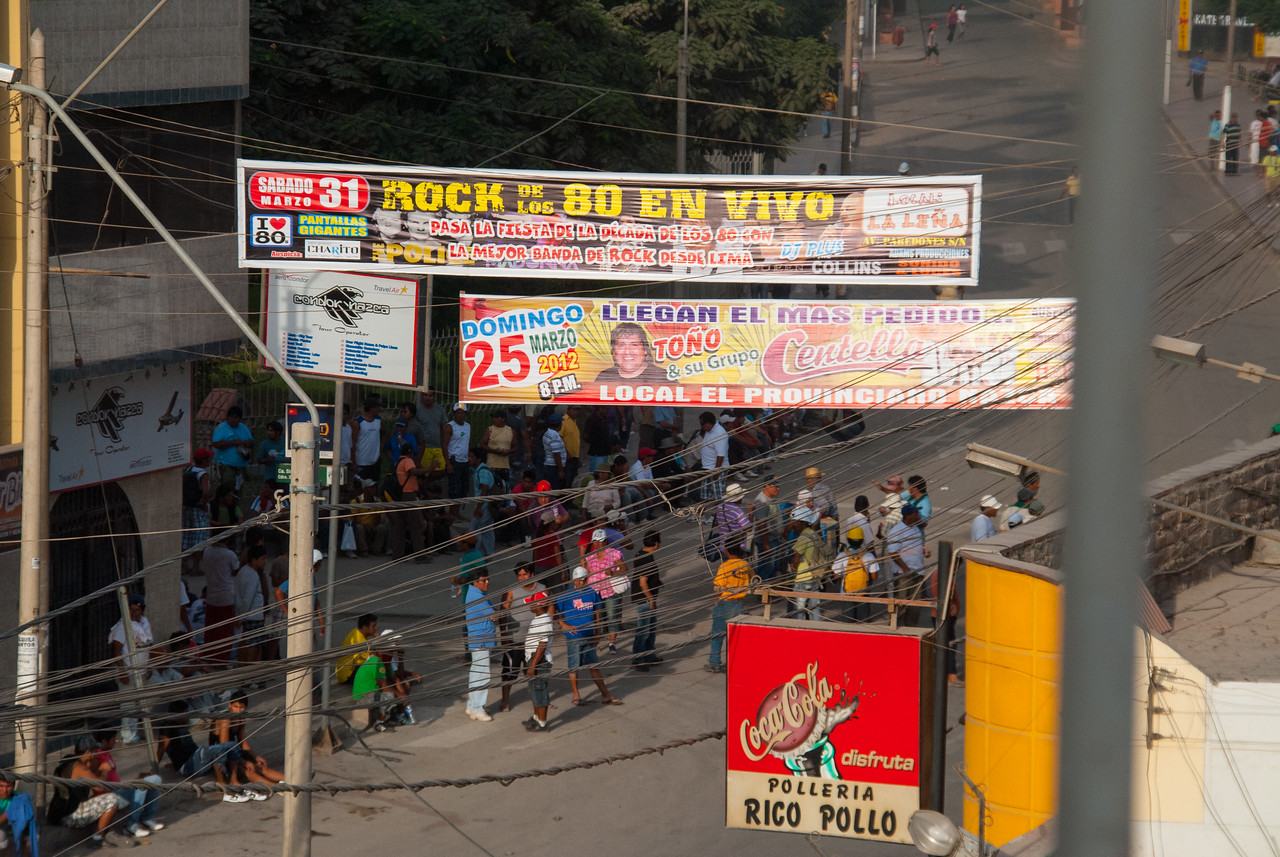 From the roof I could also see the town from above, where half-built homes alternated with mud and thatched roofs, surrounded by brick compounds. The trappings of the commercial world slammed up hard against the poverty of dirt streets and rusted vehicles. Like a lot of Peru, Nazca is a town seemingly stuck in transition from Third to First World, going nowhere fast. Stuck inside our cushy hotel, I couldn’t help but feel in the depth of my bones how privileged I was. Not for the first time, I contemplated my role as traveller and how it affected people like these.

Even so, I was sitting with my feet in the swimming pool, a half-forgotten book in one hand and the other held up to ward off a threatened splash from one of the guys. Suddenly I was choking and coughing something sharp and heavy from my throat. My eyes stung as though sprayed with acid. This was my very first, and I hope, very last experience with teargas.

We clambered up to the roof. Huge black pillows of smoke rose from the barricade, infused with the unmistakeable smell of burning tires – the miners’ response to the teargas. The smoke spread everywhere, darkening the sky like an imminent solar eclipse. Drums pounded away and even from this distance we could hear the miners chanting and shouting. 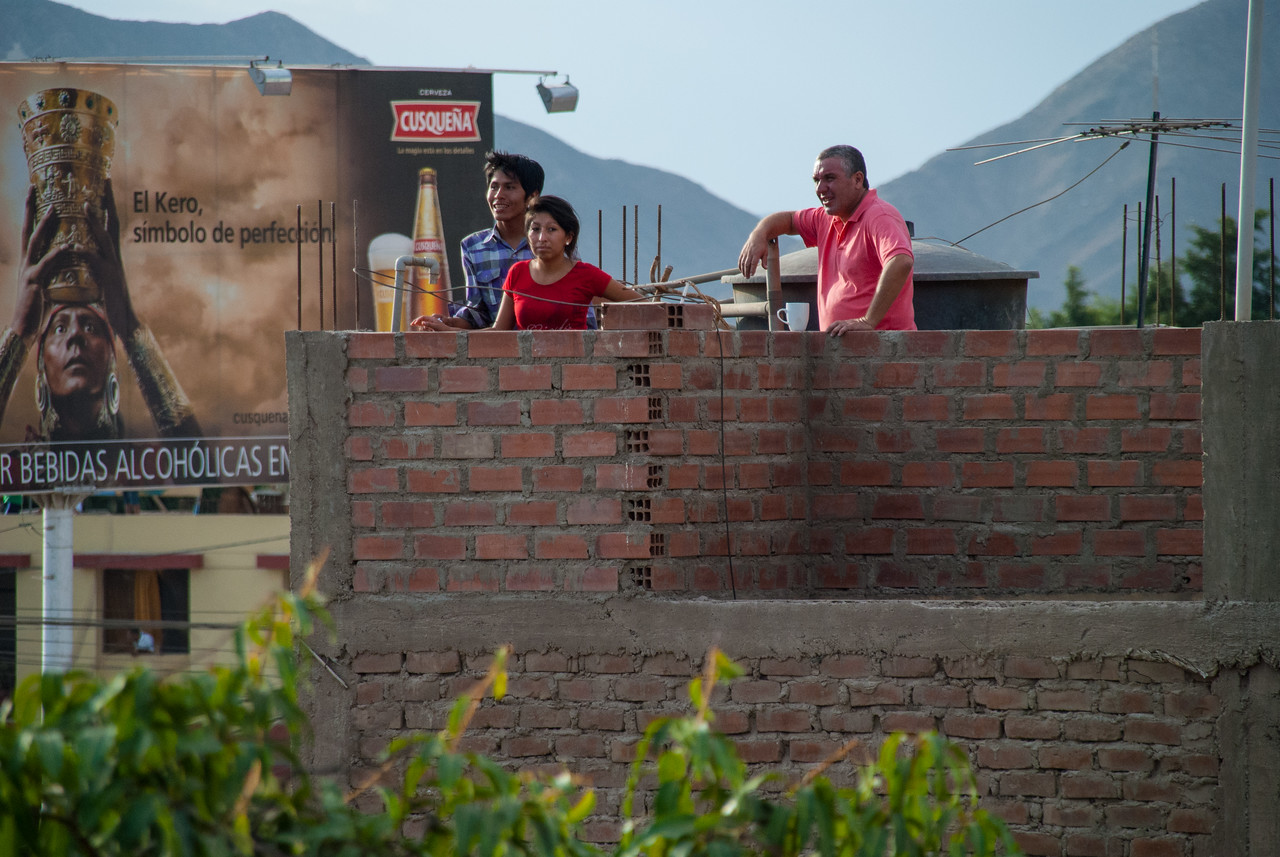 Abruptly, the police patrolling the street outside the hotel became alert, putting their helmets on, taking out their batons. The marchers came closer and we could see them clearly coming towards us, arm in arm, banners waving. Riot shields were raised in preparation and then –

It all stopped. The marching, the chanting – everything came to a halt. Before we could really track what was going on, the crowd began to disperse. Shouting became the hum of normal conversation. After a full day of noise and smoke and chanting and drumming, it was all over. We found out later that the local government had made a deal with the miners. Within a couple of hours, the streets had cleared as though nothing had happened and life went back to normal.

The next morning we wandered around town and stopped in at one of the gold processing plants at the centre of the dispute. And by processing plant, I mean a hole in the ground, buckets, water and lots of hard manual labour and dangerous chemicals. They may be mining gold, but none of them are making much money out of it.

We were a whole day behind in our trip, but a whole day ahead in learning about this complex country. These guys are fighting for their lives. It’s one of the great treasures of traveling that you get to be reminded that while you’re dabbling your feet into a nice cold swimming pool, just down the road men are being tear-gassed for the privilege of surviving each day at work.

I hope I never smell teargas again. And I hope they don’t either.