She was the most important person in the world for a thousand years, revered across empires, talked about in hushed tones and feared by the most mighty. She lived in the Omphalos, the centre of the ancient world. Most importantly of all, everyone, from kings to paupers, hung on every word she said. This is Ancient Delphi, home of the Sibyl, Oracle of Apollo. The Sibyl was a high priestess of the cult of Apollo. On only a handful of days each year, she would make herself available to the thousands of people who would travel to ask for her predictions. On those days, she would enter the Temple of Apollo, climb up onto her tripod and breathe the trance-inducing gases that rose from the depths of Mount Parnassus. Dazed and sometimes incoherent, the Sibyl would make her predictions, answer the deepest questions, and very often steer the course of the Ancient world. 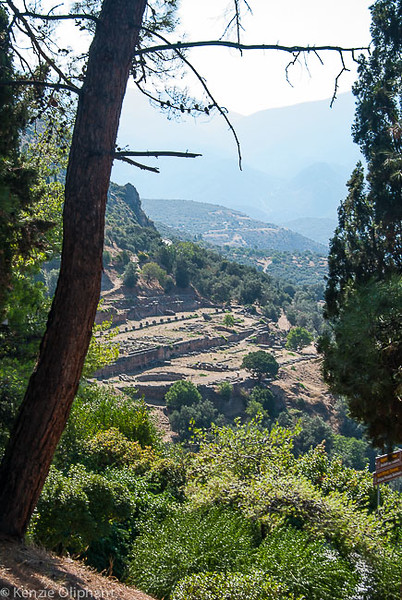 It’s hard for us to imagine these days just how much influence this most famous of the ancient Oracles had. From the legendary King Midas to the great Roman Emperor Hadrian – and everyone in between – the Sibyl’s predictions were essential to any major undertaking, especially matters of war.

In the years spanned by the Delphi oracle (approximately 9th Century B.C.E – 100 A.D.), Greece was a bubbling pot of conflict. Back then, there was no concept of a unified nation, but instead an ever-evolving collection of City States, whose rivalries and alliances pushed Greece to the edge of destruction constantly. War threatened from beyond Greece as well, most notably via the great Persian empire. A trusted, reliable oracle giving people a direct line to the gods was imperative.
But how accurate were the Sibyl’s predictions? Well, she had two things going for her. Firstly, due to the gasses she inhaled, her responses were garbled and required interpretation from the priests – making it easier for them to be ambiguous and full of alternative meanings. If the prediction turned out to be wrong, blame could be firmly placed on the message being taken the wrong way. Secondly, as the town of Delphi grew up around the Sanctuary, thousands of people flocked there through the year, delivering offerings and conducting business. This made information-gathering an easy task and would have provided the Sibyl with an always-current resource for those important prediction days.

This is a must for visitors to the site. It’s best to see the Museum first, so you can build up a context for the ruins. Most of the statues that survived are in the museum, both for preservation and security reasons. Given that the Sanctuary was ransacked a few times over the centuries by marauding Greeks, it’s astonishing the museum has such a great collection, some of which is truly stunning. Favourite pieces are the huge bronze tripods and shields as you walk into the exhibition. There is a towering sphinx and a pair of Dioscouri, together with the most delicately decorated bronze implements – all brought as offerings to Apollo. There are also gold jewellery and tiny animal carvings of the highest craftsmanship. For me however, the most amazing item is the full-sized bull, hand-beaten in silver. It rivals the famous – and equally exquisite – charioteer, considered the most important bronze statue found in the ruins.

The site of Delphi has been occupied continuously for more than three thousand years, but the Sanctuary fell into ruin after Christianity made such places forbidden. The local inhabitants eventually built on top of the ruins, but the Sanctuary was never forgotten. In the early 1890s, permission was granted to a French expedition to relocate the village a little further down the mountain and begin excavations. The site and museum we have now are the results of their mammoth efforts. Some ruins can be easy to read, others almost impossible. Ancient Delphi has a little of both. Only one building is still standing – the Athenian Treasury – but the theatre and the stadium are both in amazing condition. The Temple of Apollo is still huge and intimidating. What you do get from wandering around the ruins however, is a real feeling for just how important this place was. Buildings, altars, statue offerings and temples are crammed close together even though the site is enormous, and what remains shows the high quality of their workmanship. It’s not hard to imagine what it would have been like to wander along the Sacred Way amid the bustle of the ancient world. The town is full of hotels and restaurants, most of which boast names like “The Apollo”. The food is good, the local coffee excellent and friendliness – even in the middle of summer – is first class. There isn’t a great deal to see in the town, but it’s worth wandering around to get the best of the valley views.

There are information boards throughout the ruins, explaining the ruins. You can also get a map and information from the museum which will help make sense of what you’re seeing. Take water with you but there is also cold water fountains in both places for you to top up. Wear good walking shoes as the path is rocky in places. Wear a hat and sunscreen as there’s little shade among the ruins. The best time to go is first thing in the morning, as the sun can get very hot later in the day. Make the effort to climb right to the top to see the Stadium – it’s well worth it. There is plenty of accommodation in the town of Delphi and some decent and reasonably priced restaurants. Some are perched on the valley side of town and offer pretty spectacular views.